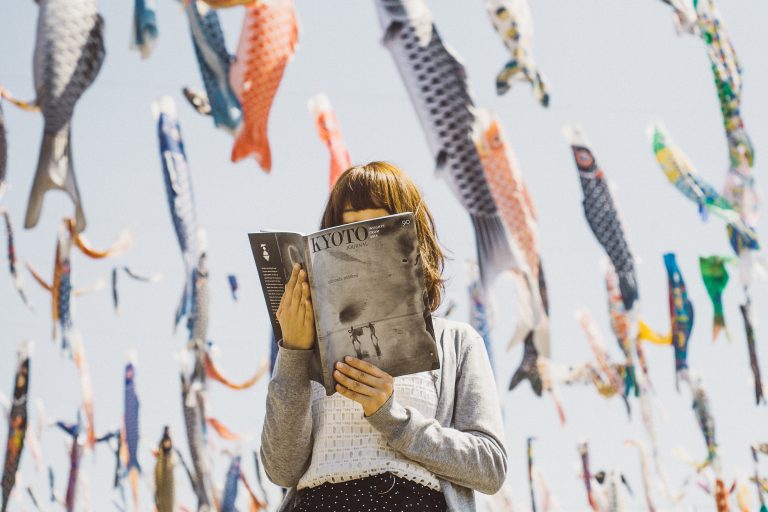 After the last two installments in our ongoing “Profiles in Transnational Publishing Series,” about Iceland-based ICEVIEW and Paris’s Skirt Chronicles, we turn our attention to the longest-running English-language magazine I’ve encountered yet from a place the British Crown never claimed: Kyoto Journal (KJ), which most recently released its ninety-fourth issue after thirty-one years. At Indiecon 2018 in Hamburg, we happened to be at adjacent tables, and their Director Lucinda “Ping” Cowing read a copy of SAND #16 between selling issues of KJ. (They later republished an essay from it, “Thirty Six Times” by Jodie Noel Vinson, on their website). Meanwhile, I engrossed myself in one of their own colorful and elegant editions, which bring together reportage, photo essays, poetry, interviews, profiles, memoir, and reviews on Japanese and Asian themes.

Last October, with this series in mind, I had a long Skype conversation with Ping about our respective journals and cities, a wide-ranging chat that for months I have struggled to sum up here. Most of all, I was struck repeatedly by the many specificities and commonalities of our chosen homes of Berlin and Kyoto – even though, at that moment, we were Skyping between Innsbruck and Lisbon. That discrepancy is not uncommon for transnational publishers, who are so often journeying (mentally and physically) between our chosen homes, our countries of origin, our far-flung readers, and elsewhere.

If Berlin – a city that keeps dismantling and remaking itself – attracted us for its anarchic opportunities, what magnetized KJ’s US-born founding publisher John Einarsen were Kyoto’s intricate living traditions. He and his contemporaries fell in love with Zen philosophy, austere aesthetics, and the city’s close relationship with the natural world as seen in local art forms such as ikebana, ink painting, and porcelain ceramics.

In some ways, that Kyoto is being drowned out by a technophilic modernity of video games and manga. Still, Ping told me, as soon as you take a side street away from downtown, you can see traces of it: surprise shrines, an artisanal tofu maker, a fifteenth-generation gold-leaf paper shop, and tiny old houses sandwiched between concrete and steel. Decades ago, the journal’s first generation of editors worried that they had missed Kyoto’s 1970s international heyday, when the city boasted a vibrant avant-garde theater and film scene. KJ 16 already asked “Is Kyoto Dead?”; seventy-seven issues later, both the journal and the city are still evolving, still going strong.

Just as SAND views worldwide writing and art through the lens of our eccentric German hometown, KJ sees itself as a Kyoto-centric forum for wider Asian culture, both in the journal’s pages and beyond. The journal describes itself as a “community that transcends place while respecting and celebrating regional and local identity.” As an example of this community, Ping mentioned the Institute for Khmer Traditional Textiles, which seeks to preserve and continue the craft of traditional Cambodian fabric-making and was the subject of a documentary by a Tokyo filmmaker. She also described the work of Ann Tashi Slater, a Japan-based Tibetan-American writer and regular contributor who wrote a jaw-dropping (and mouthwatering) essay for KJ about the Tibetan enclave in Darjeeling, India, where both Slater’s grandparents and the Dalai Lama resided. Narratives about Asia’s distinct cultural corners intersect far too rarely, and Kyoto Journal’s point of view is both deeply local and refreshingly – not naïvely – continental.

On to logistics. One of the journal’s greatest challenges comes from having so many readers in the States. KJ is printed in Kyoto, which has clear advantages when it comes to testing proofs and colors, but that places the printed copies at least one ocean – and six weeks’ shipping – away from US subscribers. Ping called this situation “painful,” and Berlin felt positively central in comparison. Other hurdles were more familiar. Like us, KJ is staffed by volunteers. Like us, they’re at the mercy of overseas postage rates. And like us, they have trouble securing public funding as a foreign-language publication, even though their work clearly raises the city’s international profile and draws visitors’ attention in ways a Japanese-language magazine never could. The Japanese Agency for Cultural Affairs presented the journal with an award, but the state hasn’t offered any financial or institutional support. In other aspects, after all these years, KJ is miles ahead of SAND and most independent, transnational publications we’ve chatted with. They have fourteen Kyoto-based editors and several more abroad, the journal is stocked in major hotels, and they’ve made serious inroads into fiscal sponsorship. On top of that, they publish quarterly!

Finally, we turned to our personal statuses in our chosen homes. The same traits that drew so many of KJ’s makers and readers to Japan – the country’s insularity and traditionalism – can often make those “outsiders” feel less welcome. This is enshrined in the law. For example, visa options for creative freelancers are dismal to nonexistent. Permanent residency takes at least ten years, the “cultural activities” visa forbids working, and Japanese citizenship is basically out of the question. Although ideas of Germanness are also exclusionary, our relatively open immigration system here – with dedicated visa types for freelancers and artists and an open door for all Europeans – felt idyllic in comparison. Again I was reminded how directly “boring” logistical hurdles, such as immigration laws and housing costs, shape creative communities.

I was pleased to hear that instead of reproducing a narrower national vision, KJ takes an active interest in Japan’s cultural and ethnic minorities, such as the well-established Chinese- and Korean-Japanese communities. “We’ve tried to look at each of their experiences,” says Ping. “We know they are part of the Japanese experience, and the issue of what it means to be Japanese.” And the new 94th issue is, in fact, devoted to perspectives on Kyoto by people born outside Japan. KJ also sees itself as part of the local community, holding bilingual events in a neighborhood Japanese-language bookstore, for example. KJ’s insider-outsider perspective is ideally suited for exploring these questions: the roles of tradition and modernity, local belonging, and regional and global connections, as they are expressed in arts, crafts, writing, and culture.