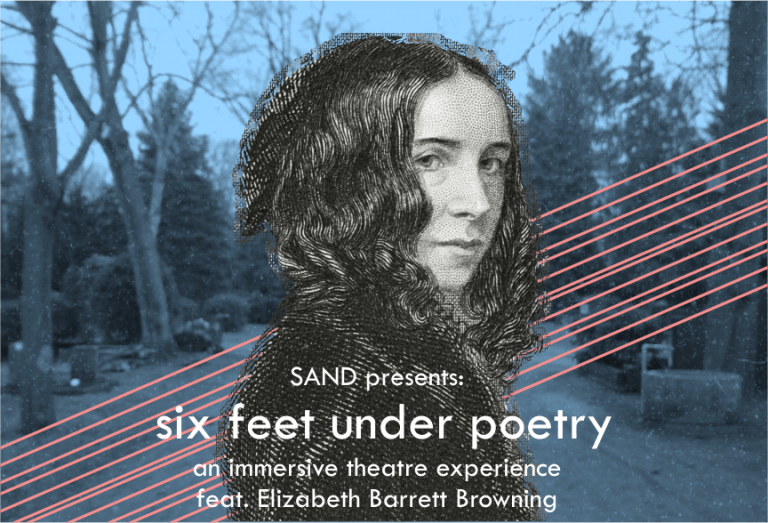 Carrying candles through the dark, the audience discovered Browning’s poetry, translations, and prose, as well as her incredible biography: from navigating the artistic patriarchy of her era, to campaigning for the abolition of slavery and child labour.

Jos Porath is a director of immersive installations, born and raised in Berlin, Germany. They have studied, trained, lived and worked in Germany, the United States, England, Bolivia, France and Austria. Jos has been directing and producing immersive installations since 2014. Their work has been shown in various off-site venues internationally, including as part of theater and performance art festivals, in Germany, UK, Columbia and Bulgaria among others. They have trained with immersive theater pioneers SIGNA (Denmark/Austria) and Punchdrunk (UK). Jos’ installations explore notions of accountability, self-determination, vulnerability and poetic experientiality in non-traditional immersive formats.

Growing up in Berlin, Corinna Duemler developed an early interest in theater, photography and film. After she completed her further education at Emerson College in Boston and Goldsmiths University in London, from which she graduated with a Bachelor of Arts in English Literature. Having completed her studies, she returned to her hometown to work as an assistant for numerous theater productions at such institutions as the Komische Oper, the Berlin Philharmonic and the Volksbühne Berlin. Recent years have seen her realize own projects on and increased involvement with new forms of theater. Her collaboration with Jos Porath began with “The Shells – Ausflug nach Neu-Friedenwald,” a production for which she served as dramaturge. With her interests firmly rooted in the intuitive qualities of theater, she now seeks to apply her professional practice and unique point of view to developing advanced theatrical contact through the immersive format.