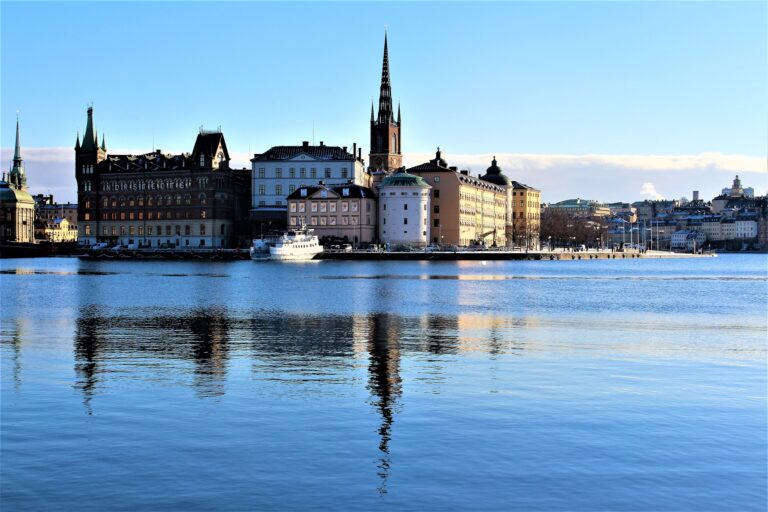 “Hike Up that Second Mountain”: The Stockholm Writers Festival

On 13–15 April, our friends up north will be holding the Stockholm Writers Festival, the Swedish capital’s first-ever writers’ conference in English. It is devoted to helping emerging writers “find their path to published.” The program features a keynote by prizewinning novelist Elinor Lipman, panels and workshops with established writers, editors, and agents, as well as plenty of chances to meet fellow Scandinavia-based writers. See their website for more and to sign up quickly before they sell out. Our conversation with Catherine Pettersson, the festival’s founder, ranged from the geography of dubbing habits to the collection of an aristocratic hoarder and, along the way, gave us a picture of Stockholm’s vibrant English literary scene.

SAND: How did the idea for the Stockholm Writers Festival come about?

Catherine Pettersson: I’m a writer myself and for years I’ve had to travel to other countries that have no reputation for being even bilingual. Italy has a big literary festival, Paris has big English-language literary festivals, and Stockholm didn’t have one. It’s crazy because I get the feeling that Sweden is even more highly bilingual English than Germany, which is pretty good in on the grand scale of things.

If you look at a map of English skills around Europe, Scandinavia basically wins.

What’s surprising about Germany is that you guys dub television programs.

I think the countries that tend to speak better English have smaller languages that cannot financially justify dubbing. Here it’s a huge industry, and every major Hollywood actor has a German “dubbelganger.” Their careers get linked together.

I guess that’s the unintended consequence of being a small market. You have this disadvantage, but you speak great English. On the flipside, it was surprising to us that Sweden didn’t have any conferences in English. They do have a crime festival every summer that’s in English and Swedish, but primarily Swedish.

So how would you describe Stockholm’s English-language literary community? Would you call it a community?

From my viewpoint, it’s a community. I’ve been part of a writer’s group, Stockholm Writers Group, that has been aroundcontinuously in existence since 1994. K – kind of amazing.

Now, thanks to digital, it’s getting easier and easier to build these communities. One of our members, Cassie Gonzales, is now teaching at Emory University, and whenever she’s back she holds mini craft workshops on Meetup, which are always oversubscribed. She used to tell me this, but I was traveling and just listening to the ambient bitching about why didn’t we have something of our own. And I thought, “Well, yeah, why don’t we? Why are we waiting for somebody to do this for us?  Why can’t we do it?”

You look around and you’re, like, “Why is this not happening?” And then you realize the number of people who could do it is actually fairly small and if you’re the one thinking it, then you should be the one doing it.

Exactly. The classic refrain: “If not me, who? If not now, when?” It was a slow dawning, not an overnight epiphany. Years of bitching and moaning and then going, “Well, wait a second, I’m a professional marketer. I run events. I know people. We can get really good people.” And then I was going to other conferences and I cold-pitched one of the agents we have on the program.  Brooks Sherman is kind of a rock star right now. And he said yes. Because they want to travel, they want to get out there.

Anyway, we’re kind of using the power of tourism, literary tourism, to get at some of these heavier hitters and then mixing it up with really great local writers. And that’s how we’ve made it possible financially.

Is it hard to publish when you live farther away from English presses and agents?

Actually, I think it’s easier to succeed at a distance these days. Thank God we don’t have to post manuscripts with self-addressed, stamped envelopes anymore and wait months for a response to come through the post.

With digital, it’s gotten physically easier to transact the process. What’s harder is being away from your source material if you’re writing about your home country. That feeling in your bones of the zeitgeist is something that you lose from a distance. Then again, writing about alienation and being “the other” is more tangible when you’re living the life of an expat.

What’s been really interesting is that a full thirty percent of the people signed up for this are Swedish writers, even though the whole reason for doing this is that we’re unapologetically English, English, English.

That’s very impressive, and definitely a difference between the two places. If we announced a similar festival, we would not get thirty percent German writers. There is a kind of unwritten divide, which we’re really trying to bridge now.

Yeah, that really surprised us too. But then I talked to a couple of the Swedish authors we have on panels and I said, “Does that surprise you?” and they said no. Because everyone wants to get into the English-language market. And there’s a lot here for readers but not much for writers.

Have you noticed any patterns in English-language writing from Stockholm?

The writers I know are doing everything from plays to poetry to memoir and historical fiction. So there are no solid patterns. But we did notice from the First Pages Prize that a lot of the stories set in Stockholm leaned more toward Stieg Larsson than Astrid Lingren.

Can you say a bit more about the contest? Even if it’s too late to apply now.

The contest is to encourage unpublished writers to become published ones. It looks at just the first five pages of any genre. The idea is to reward exciting writing and fresh voices. And we’ve been over the moon at the quality of the more than 250 submissions.

What other “institutions” are there on the Stockholm English lit scene?

There’s the English Bookshop. And actually, one of our board members, a wonderful guy named Adnan Mahmutuvić, started the transnational creative writing masters program in English at Stockholm University. I think that’s remarkable. He’s the one judging the contest, by the way, and the process has been fantastic.

Sarah Hollister was saying that you don’t have a magazine like ours there, but we definitely don’t have a university creative writing program in English. So are the people in your writers’ group and the master’s program mainly from English-speaking countries?

In my particular writing group, it really is native English speakers. We’ve had Australians and New Zealanders and Americans and Canadians… and a couple of Swedes. Maybe two that I can think of since 1994.

They’re much, much more varied in Adnan’s Stockholm University class, of which I’ve met probably a third. Mexican, Finnish, Greek. Was there a Swede? There may have been a Swede in there. And only a couple of Americans. That really surprised me.

How would you sum up the festival for someone who hadn’t visited your website?

Well, in a phrase, it’s “find your path to published.” It’s this idea that, as an author, especially if you’re a newbie, you think that the big mountain to climb is the manuscript and then you realize there is a second, much higher mountain behind that one that you couldn’t see. So you need the craft, but then you also need the gear to hike up that second mountain, which is the industry: How you get an agent? Should you go indie, should you go traditional? If you undertake either of those journeys, how do you equip yourself?

These are the kinds of things that writers are not necessarily as good at. They’re good at writing and then there’s a whole other stage of the process.

Exactly, and the sad thing is how many writers that kills. I mean a lot of writers die right at the foot of that mountain. I think it’s a shame.

I was going to say, you should really come up to Stockholm and come to this writer’s festival!

I would have loved to! I was really excited to hear about it and then frustrated to find out it was two days after the London Book Fair.

We set our date first and for some reason, they wouldn’t cancel. The bastards.

For the lucky writers who do get to make the trip to the festival, what’s one place they should see while they’re in Stockholm?

The Hallwylska Palace in the center of the city. The house showcases the artifacts of an aristocratic hoarder. Although much more tastefully appointed, naturally.

Catherine Pettersson, founder of SWF18, was born American and chose to become a Swede after falling in love with a man she met on an airplane. She plies her trade as a marketing consultant by day. And writes fiction at night. (Or, actually, in the morning, but night sounds more dramatic.) Reach her at stowritersfestival@gmail.com.