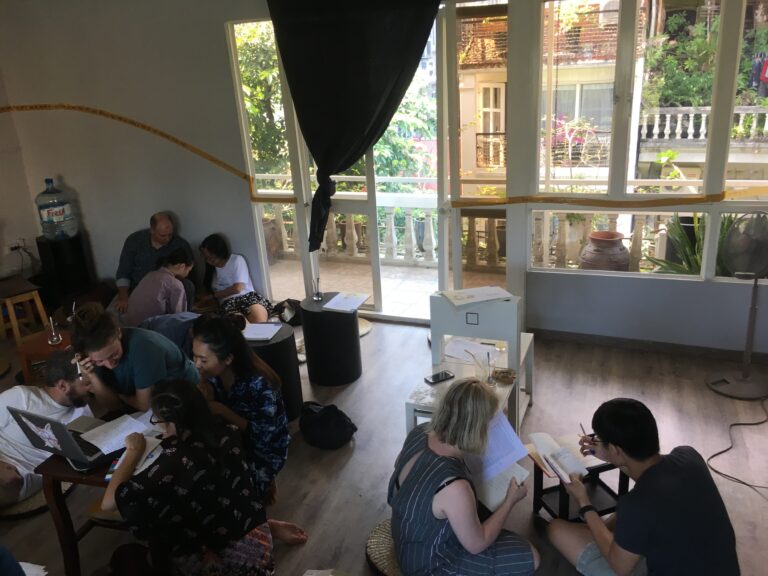 by Jake Schneider, Editor in Chief

Most of the writing SAND publishes is unsolicited, and we’re often amazed at the many places in the world from which our contributors find us, joining the Berlin community in our journal’s pages. Now, for the first time, we’re excited to travel in the other direction and meet some of our farthest contributors in person on their home turf.

My trip with SAND Poetry Editor Greg Nissan to Ă-Festival 2017 in Hanoi and Saigon came out of one of these artistic relationships, as I’ll explain. The festival is bringing together more like-minded independent journals and presses with poets, translators, organizers, and publishers from across Asia and the wider world. We’ll be taking part in five days of readings, discussions, book fairs, and workshops in both cities.

Our original connection to the festival was the poem “a parade” by Nhã Thuyên, translated by Kaitlin Rees, which appeared last year in Issue 14. You can read it here.

The poem’s author and translator are part of a tightknit independent literary scene in the Vietnamese capital, and they co-run a publishing house, AJAR Press, which prints a bilingual Vietnamese-English magazine as well as poetry collections in both languages. AJAR Press is also one of the hosts of Ă-Festival, and we were delighted when they invited us to participate in the second edition.

We first thought of flying to Hanoi when we saw a video from last year’s inaugural edition of Ă-Festival and realized that two of our other past contributors, Tammy Ho Lai-Ming from Hong Kong and B.B.P. Hosmillo from the Philippines, were also there. That made a total of four contributors attending the same poetry festival more than eight thousand kilometers away, and it also made the world smaller than we thought.

Besides admiring Nhã Thuyên’s richly textured and cyclical poem, we were struck by Kaitlin Rees’s approach to translating its trickiest elements. The biggest challenge there was the Vietnamese language’s intricate system of personal pronouns, which are poorly matched by the neutrality of English’s I, you, or we. When we asked Kaitlin to compile a glossary of these pronouns to accompany her translation, the glossary (“notes on a parade”) became a poem of its own.

Kaitlin’s encounter with the uncanny specificities of language reminded me of an event I organized in 2015 called “Untranslatable.” Back then, I asked nine Berlin-based literary translators for texts that they considered in some way “untranslatable,” and they sent in everything from Oulipo experiments to Flemish sound poetry to punning riddles by Walter Benjamin. Then the translators swapped texts and had a month to wrestle with them before performing the “impossible” translations at our event, which took place, appropriately enough, on a Friday the 13th.

At Ă-Festival 2017, in addition to participating in a reading and a panel, Greg and I will be holding a follow-up “Translating the Untranslatable” workshop, this time featuring even more languages we don’t personally speak. In small groups, the participating poets and translators will attempt in two hours what the last group accomplished in a month – to take supposedly untranslatable texts apart and put them back together in a new home: Vietnam.

These unexpected chances to build community across continents are part of what excites us about running a truly international journal.

Travel funded by the Berlin Senate Department for Culture and Europe.