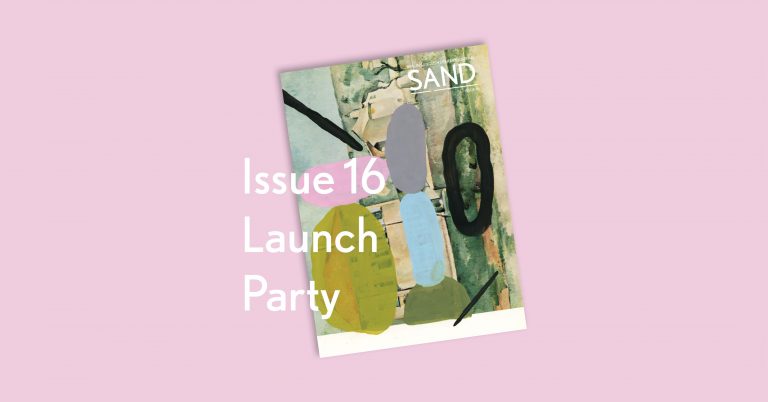 Issue 16 is going to print and that means party time! Last year at Anita Berber was wicked so we decided to return to Wedding for our autumn launch. We’d love for you to join us on Friday the 24th November for readings from the new issue and then less brain more ass with DJs and a cocktail special Sex on the SAND.

Dong Li was born and raised in China. His honors include fellowships from German Chancellery-Alexander von Humboldt Foundation, Akademie Schloss Solitude, PEN/Heim Translation Fund, Yaddo, and elsewhere. He has poems in The Kenyon Review, Conjunctions, The Cincinnati Review and others. His work has been translated into German and appeared in manuskripte and Neue Rundschau. On 24 November he will read his poetry from issue 16.

Alexander Booth is a writer and translator currently living in Berlin. His work has appeared in numerous international print and online journals. His PEN award winning translation of Lutz Seiler’s poetry collection in field latin appeared with Seagull Books in 2016 and was followed by Gunther Geltinger’s experimental neo-Gothic novel Moor earlier this year. A pamphlet of poems, Roman Hours, appeared this past summer. More information can be found at Wordkunst.

Alissa Jones Nelson grew up in Southern California and has spent the last 15 winters wondering why she ever left. She currently lives in Berlin, where she works as a writer, editor, and translator. Her fiction has been shortlisted for several prizes, including the Dundee International Book Prize. Most recently, she was one of the two runners up for the 2017 Berlin Writing Prize, read an excerpt from her this piece here on our website.

One of the DJs on the night will be the fabulous lady Sugar Free. Raised through Madrid’s rising dance scene, she is now based in Berlin while still running her COMA project, a house session based in Madrid that brings club culture and an underground sound to the Spanish capital.

Fonte has a major talent for hearing and collecting gem records. Now a Berliner, he grew up as a DJ in Madrid where he runs the COMA project with his lady Sugar Free, with whom he frequently shares the decks. On Friday he’ll play solo and perhaps some B2B. Expect heavy four-four selections.

Who is Tha Traplord? In his own words: Comin straight outta the EU’s west coast bando is Tha Traplord. After establishing a successful traphouse in this city, conceivable is the serving of dance floor crack hitters. Known for fashioning cops to shazam the party’s soundtrack, delightfullness to make his acquaintance is foreseen. Check this boy’s showcase before his DJ set on Friday.

And directions in case: Go south from S-Bahn Wedding and turn right onto the Panke river walkway. The entrance is right behind the railway tunnel.