SAND 19 Contributors On Their Favourite Work In Translation 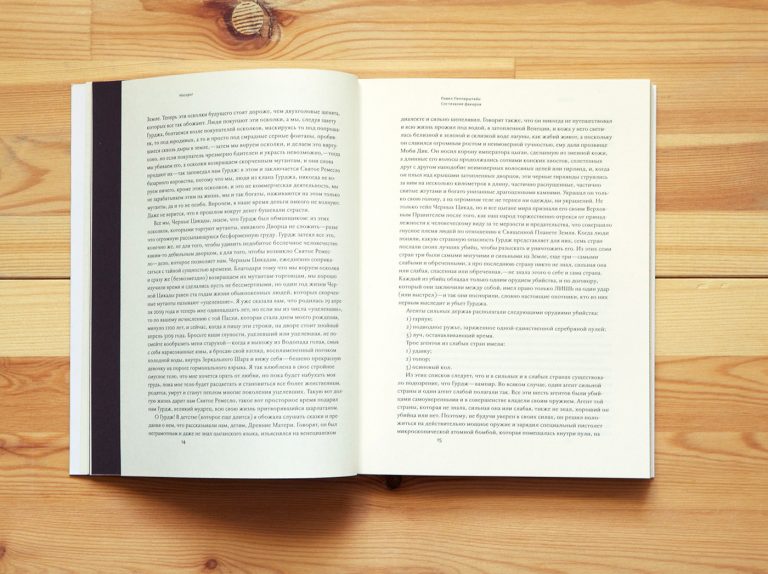 In the run-up to the publication of SAND 19, we quizzed our contributors on their favourite pieces of writing originally published in a language other than English.

We were overwhelmed by their varied, heartfelt responses, which ranged from French children’s books to Hebrew religious texts, and dystopian Kikuyu fiction. We were also struck by the fact that several of our contributors had common favourites, despite their very different cultural and geographical backgrounds, which makes it seem even more fitting that their works share the pages of our forthcoming issue.

We hope you enjoy their answers as much as we did.

L’ecume des jours by Boris Vian (Froth on the Daydream). One of the few books I have read several times and every single time I really don’t want it to end. Although I know the story too well by now, every time I read it I am almost convinced something entirely new will happen. To me it’s beyond literature – as literature should be, in my view; a beautifully sad and exhilaratingly funny universe I want to live in.

Jeffrey Gibbs | “Sometimes They Fall From The Sky” | Fiction

It’s difficult to choose a favorite work not originally in English. My story published in SAND was inspired in many ways by the moods in the The Complete Stories by Clarice Lispector, translated from the Portuguese by Katrina Dodson, in particularly the story, The Chicken which manages to turn the silliest of domestic birds into something haunting and profound. My favorite, though, would have to be the novel, The Wizard of the Crow by  Ngũgĩ wa Thiong’o, another inspiration for my short stories about Istanbul. Translated by the author himself from Kikuyu, it brilliantly and comically captures all the horror and absurdity of living in a dictatorship. It seemed that a hundred times a page I was left laughing or shaking my head in recognition.

My best translation book is Murogi wa Kagogo, written by Ngugi wa Thiong’o, which he translated from the original Kikuyu to English as Wizard of the Crow. The story of the book is set in an imaginary Free Republic of Aburiria, governed by a Ruler. The story is a satirical representation of a country that is most likely African.

Though I am primarily in love with English, I have the biggest hardon for Brazilian Portuguese, which I learned when I was in elementary school in Peru.  Not until adulthood, when I had nearly rusted that tongue over in me, was I introduced to Clarice Lispector (in English). Her fire words forced me to seek her out in the original Portuguese, which is a glory to read aloud as if in a panic; especially her Agua Viva.  The insides she puts up, to me, are like those of a makeshift fun-house: mirrors, curios and surprises.  I don’t know how to describe it… think Woolf, just untidy with a slight scent of gasoline.

During my undergraduate studies, I came across Brazillian writer Clarice Lispector and her fantastic novella Água Viva. Equal parts poetry, storytelling and lyricism, the text is an incredible testament to pushing the boundaries of writing. A gripping and affirming read.

One work that I think about all the time is the short story “End Of The Game” (“Final Del Juego”) by Julio Cortázar. It absolutely destroys me every time. It’s such a heartbreaking snapshot of early adolescence, from a male author with actual empathy for the female experience, which is so astonishingly rare for 2019, let alone 1956.

I picked up Dorthe Nors’ Karate Chop at a small press book fair just after I had finished college. Though the brief stories are in a familiar world, the prose Nors uses makes them tender and strange. This was my first exposure to contemporary translated literature. It got me interested in work outside of the English language.

My favourite piece of writing that was not originally written in English would be the Hebrew Bible, not because I’m religious (I’m not), but because it may be one of the oldest pomo texts in history (or at least, one of the oldest texts that exhibit post-modern qualities like intertextuality, metafiction, fragmentation, and a most unreliable narrator). The persistent gaps, contradictions and paradoxes, a consequence of extensive redaction over centuries, resist any possibility of a singular, overarching (not to mention fundamentalist) interpretation, and so make it an endlessly fascinating text, especially in the original Hebrew.

I’ve fallen so in love and wonderment with Aase Berg that I named my cat after her. Aase Berg is an absolutely mad and brilliant surrealist Swedish poet and master of the necro-pastoral. In her books With Deer and Dark Matter, human-animal-machine-plant hybrids writhe and fight with or against the decaying land around them. The way she works with language itself mimics the hybridized creatures in her work as she creates new words and meanings by smooshing words together, much like Paul Celan, but also by using a variety of languages, as in her book Hackers which uses Chinese, English, and Swedish in both the original and in the translation. Her engagement with language in collaboration with her translator Johannes Göransson of Action Books is enhanced by the decision they made to include the original Swedish on the left side pages throughout all of her books. Though Hackers perhaps more clearly engages with contemporary jargon, technology, and referenced events, there is a displacement of time and space, a brutal refusal to submit to borders, boundaries, traditions, norms that fuels all of her writing.

My choice would be the complete works of Juana Inés de la Cruz (Obras completas de sor Juana Inés de la Cruz). I used to skip class, hunching under the bleachers near the football field or sitting on a curb in the school parking lot reading her work until the last bell rang & I could go home or to work. I got suspended a few times because of her but, obviously, it was worth it.

Saskia Vogel | “What Once Was” [translator] | Nonfiction

My answer: Lina Wolff’s The Polyglot Lovers. I fell in love with Lina Wolff’s writing when a short story of hers came across my desk at Granta, when I was their publicist. Her vision, her voice, her dry wit, her cool, sharp gaze has made her one of my favorite authors of all time. I translated that story, and now have been lucky enough to translate her latest novel, The Polyglot Lovers: an incisive polyphonic story about a lost manuscript, male genius, and the nature of perception. As a writer, translating her work has taught me so much about non-linear storytelling and playfulness in language.

Helena Gränstrom | “What Once Was” | Nonfiction

One work that springs to mind is the philosopher Martin Buber’s I and Thou (Ich und Du), published 1923. To me, the importance of this book is how it shows that the way we relate to our surroundings also form who we become; that in denying that the living world around us has a soul, we are at the same time denying the possibility of discovering one within ourselves.

I gobbled up children’s classics, fairy tales and comics (notably Asterix and Tintin) in translation long before I was aware that they’d been written in a language other than English. Once I’d started learning languages, I became more conscious of the role and the skills of the translator in bringing those stories to me. During a spell of illness in my teens, I remember reading The Little Prince by Antoine de Saint-Exupéry and being blown away by the big philosophical questions posed in the beautiful little book. It left a lasting impression. I don’t remember whose translation I read back then, but I’ve often given Ros Schwartz’s translation of it to young friends in recent times. It’s available in a few different editions now.

I didn’t grow reading books or pieces of writing outside America growing up, but one book I do remember reading is Le Petit Prince also known in America The Little Prince. My family are from Haiti and most of my family members speak both Creole and French. Reading Le Petit Prince in my family is practically tradition as a child. I loved adventure, pretending, and playing as a child. Reading Le Petit Prince as child made me want to explore the world more and imagine every little thing in my life whether it’s real or not. No matter what language a book was originally written in, you can always find something in it to connect with.

One of my favourite books is Idea della prosa (Idea of Prose) by Giorgio Agamben, available in English translation by Michael Sullivan and Sam Whitsitt (SUNY Press, 1995).

Impossible to identify just one book, but I have been heavily impacted by Alexander Wat’s The Envoy of Mr. Cogito in the translation of Bogdana and John Carpenter. Among my favorite lines: “and let your helpless Anger be like the sea / whenever you hear the voice of the insulted and beaten”.

Either I have no favorites or they’re always changing. But I do have touchstones—texts and sounds that have marked me irrevocably. All other marks are compared to those primal ones. Among my touchstones are the poems/songs of the North Indian poet-saints of the Bhakti movement. especially  the works of Kabir, many of which are available in translation by Arvind Krishna Mehrotra. I hesitate somewhat to point to this corpus as a major influence at this point in time; I have no doubt that Bhakti traditions, like many other Indian traditions, are currently being “reclaimed” by Hindu nationalists and turned against marginalized communities.As a nontheist, I find in Kabir the extreme attention that is devotion, and this devotion does not need a god as its object.

I enjoyed reading Laura Esquivel’s Like Water for Chocolate, but I loved it when I finally read it in its original Spanish after moving to Mexico. The Mexicaness of it was so alive it was practically breathing. One Hundred Years of Solitude by Gabriel Garcia Marquez is another favourite book which I first read in English translation but I suspect that knowing and experiencing Colombia would also take that book to a whole new level of appreciation.

In the late 70s when I quit painting and decided to write a novel, I came across Robbe-Grillet’s For a New Novel (Pour un Nouveau Roman). This introduced me to a whole slew of Nouveau Roman writers whose work had been translated into English. Translated French became my favorite language. It was clean, non-idiomatic, and the rhythm of the sentences didn’t feel automatic or casual but had a subtle formality which I liked. The writers included: Nathalie Sarraute, Robert Pinget, Maurice Blanchot, Raymond Rousell, Philippe Sollers, and Marguerite Duras. Some of the translators were Richard Howard, Maria Jolas, Barbara Wright, Lydia Davis, and Robert Lamberton.

Miguel de Cervantes’ Don Quixote was the book I read first in a sequence of classes that made me the thinker, writer, and person that I am today. It was actually the very first book I read in a university course. Something about Don Quixote and his adventures with Sancho resonate with me–I’m an idealist. Perhaps my efforts in this life aren’t concerned with chivalry or fighting imaginary enemies, but I’d like to think Don Quixote’s adventures meant something. That my adventures mean something. I’d like to think there’s more to windmills, too.