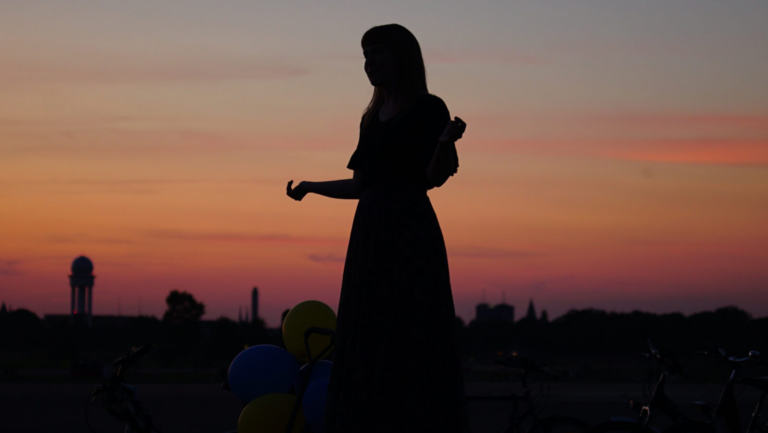 At sunset on 22 August 2019, SAND hosted an open-air reading in a circle of stones at Tempelhofer Feld, a former airfield turned public park in Berlin.

BENJAMIN WAGNER is the author of two illustrated books of erasure poetry, A Race with The Sea and Nightlight (Die Oase) and the forthcoming novel Hideaways. His work has appeared in many hard-to-pronounce publications such as Isthmus, Neologism, and Vaidapé. He creates installations of non-invasive graffiti poetry around the world.

ROSE WARNER MILES grew up in New York, where she worked at the amazing Museum of Natural History surrounded by minerals and fossils. She likes to write about “modes of interrupted or mediated experience, such as vicarious trauma, mistranslation, or abandoned living spaces.” She’s recently had poems featured in FU Review and she’s working on her first collection.

CASS EDDINGTON is a poet from Utah who’s also a teacher. Her manuscript if the garden was a finalist in Kelsey Street Press‘s 2017 FIRSTS. She teaches creative writing online, has done community arts organising, and is working on a PhD in the shadow of the Rocky Mountains.

IAN ORTI was born in Canada to Ecuadorian and Irish parents. He has won awards for both of his two novels, The Olive and the Dawn and L , and has most recently published a story collection called Royal Mountain City Fugue. You can also find his writing in McSweeney’s, in Canadian French, and in SAND.

DEMI ANTER is a poet and spoken word artist who has been on stage at the Glastonbury Festival, and on paper in places like Ninth Letter, The Selkie and MOJO. She’ll be performing at the Edinburgh Fringe and Electric Picnic next month.

EMMA FLYNN is an Irish writer whose fiction, non-fiction and reviews have been published by The Cardiff Review, The Stinging Fly, Bustle, and more. She’s now working on her first novel.

RAPHAEL KORANDA is another writer from Ireland, who also grew up partly in Germany. They write poetry and prose about place, language, and belonging and perform regularly at open mics.

SIOBHAN LEDDY is an editor, writer, and researcher. Her fiction and non-fiction has been published in Catapult, Entropy, and more. She’s interested in amateur microbiology, geopoetics, and weird invisibilia.