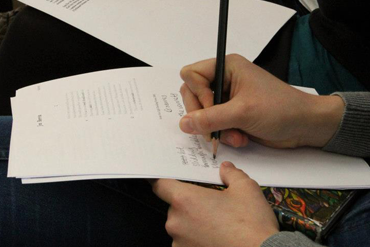 Found in Translation Competition and Workshop

SAND Journal’s Found in Translation Workshop for emerging literary translators up to age 30 took place from 19 to 21 April 2013 in Berlin. It featured guest speakers, hands-on workshop sessions, dynamic discussions, and, of course, brunch. SAND also held a translation competition whose two winners, Allison M. Charette and Julia Sanches, were invited to participate in the workshop and featured in SAND Issue 7.

Allison M. Charette and Julia Sanches were our two winners for the SAND Found in Translation Competition, featured in SAND Issue 7.

Judge Katy Derbyshire chose Allison M. Charette’s story “Big” for its fully-formed, naturally fluent feel and well-rendered dialogue. The story is a novel excerpt from Grosse by Isabelle Rivoal. Allison is a translator and writer whose book The Last Love of George Sand was released in February 2013. In the musical world, her English translation of Hector Berlioz’s L’enfance du Christ was used as supertitles in the New York Choral Society’s performance at Carnegie Hall. She has lived in various regions of France, where she taught schoolchildren and translated Sève, a local author’s poetry collection. In 2013, Allison was residing in western New York with her husband.

Catherine Hales was impressed by Julia Sanches’ translations of Ana Martins Marques’ poetry from A vida submarina (The Subaquatic Life) and Da arte das armadilhas (On the Art of Traps). She especially liked the sense of quietness at the heart of the poems, their poise and perfect pitch in the language. Julia is Brazilian by birth but has lived in New York, Mexico City, Lausanne, Edinburgh and Barcelona. She obtained her undergraduate degree in Philosophy and English Literature from the University of Edinburgh and a Masters in Comparative Literature and Literary Translation from Universitat Pompeu Fabra. She was runner-up in MPT’s poetry in translation competition and has translated fiction from Spanish (in Suelta) and into Spanish (in Asymptote), as well as publishing a short story in Vol. 1 Brooklyn. In 2013, she was working as a freelance translator, private teacher of English and Portuguese, and as a reader for Random House Mondadori, while also interning for Asymptote and Electric Literature.

Workshop leaders Catherine Hales and Katy Derbyshire conducted dynamic sessions that explored spontaneous creation and the art of translation. Both groups were capped at 10 participants in order to facilitate an intimate and lively discussion.

“The element of spontaneous creation in translation is where you take a high dive off the cliff of the original and make a new original poem out of it,” according to Catherine Hales, the weekend’s poetry workshop leader. In this workshop, participants took a close look at the specific elements of poetry translation – how to deal with line breaks, scansion, meter, and meaning in an art form that’s so closely tied to the intricacies of the language in which it was written.

Catherine Hales is a poet and translator whose translations of contemporary German poetry have been published in several print and online magazines in the UK, US, and Europe. Her translations of Norbert Hummelt’s poems were published in Berlin Fresco by Shearsman Books in 2010.

Katy Derbyshire will be leading a group of prose writers in discovering how good translations work. The prose workshop will examine translations from different languages in order to probe ideas such as how invisible a translation should be and to shape a method for approaching a piece. Participants will also have the chance to workshop and critique each other’s work in an animated group discussion setting.

Katy Derbyshire grew up in London and studied German literature before moving to Berlin in 1996. She has translated Clemens Meyer, Inka Parei, Dorothee Elmiger, Simon Urban, Helene Hegemann, and other German writers.

Morning Session: The Who, the What, and the Why

Both workshop groups came together on Saturday morning for a workshop session with a special guest speaker. In this session, we looked at the foundations of translation, its history, its evolution, and the reasons we continue to do it.

Afternoon Panel: In the Industry

John E. Woods, Martin Chalmers, and Lucy Renner-Jones had a panel discussion, moderated by Katy Derbyshire, on working as a professional in the translation industry. They looked at language and translation from various aspects: cultural, socio-political, historical, and practical, as well as talking about what challenges a translator faces both with the work and in the workforce.

John E. Woods is a translator who specializes in translating German literature and whose portfolio includes much of the fictional prose of Arno Schmidt and contemporary authors such as Ingo Schulze and Christoph Ransmayr. He has translated all of the major novels of Thomas Mann as well as works by many other writers.

Martin Chalmers’s book translations include work by Herta Mueller, Erich Fried, Hubert Fichte, and Alexander Kluge as well as The Diaries of Victor Klemperer. In 2013, he had recently had translations of Hans Magnus Enzensberger published under the titles The Silences of Hammerstein and (with Esther Kinsky) A History of Clouds.

Lucy Renner-Jones has worked as a freelance German to English translator since 2008 and specializes in literary texts and photography books. She works for Transfiction, a collective of native-speaker translators who specialize in theater and literary texts.

Translation isn’t static. Yet so often, we approach it from a rigid, structured point of view. Workshop leader Donna Stonecipher presented translation in play, a hands-on, interactive session that looked at translation from a new angle, as the group delved into topics such as homophonic translation and translation within languages.

Donna Stonecipher is the author of three books of poetry: The Reservoir, Souvenir de Constantinople, and The Cosmopolitan. Her poems have been published widely and have been translated into French, German, Spanish, and Czech. She also translates from French and German, and her translation of Swiss author Ludwig Hohl’s novella Ascent was published in 2012.

This was an open-invitation event at Dialogue Books.

Hand-crafted breakfast cocktails, hot coffee, gooey-fresh pastries, buttery English muffins, and hard-boiled eggs to  crack with a silver spoon? Clearly, this was a brunch send-off SAND-style. We celebrated the  end of the workshop  weekend with a late-morning  brunch and reading by each of our  participants. Workshop groups presented what they’d worked on over the weekend as well as some  of their own translations.

SAND Found in Translation was proudly funded by the EU’s Youth in Action Programme.