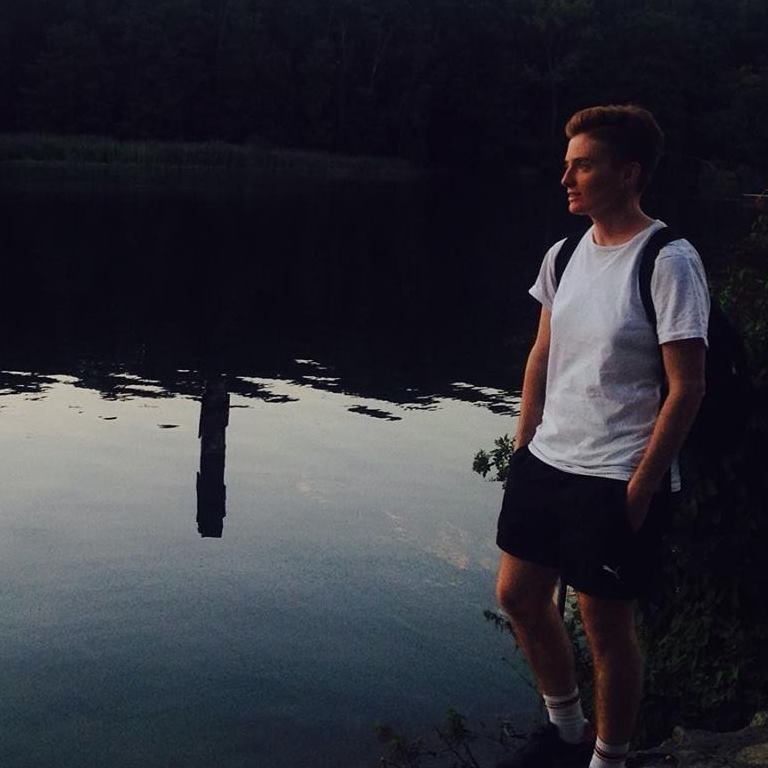 Nate McCarthy’s essay “The First Steak of the Rest of My Life” appears in SAND Issue 17, and they will be reading at our Berlin launch on 25 May. SAND Nonfiction Editor Susanna Forrest talked to Nate about the ethics of food writing and the difficulties of tackling chronic illness as a literary subject.

SAND: You were born in Sydney and now live in Berlin. Could you tell us a little about your life and what you’re discovering about your adopted hometown? When did you start writing?

McCarthy: I used to mainly write songs in Sydney and only started writing stories and the odd bit of creative nonfiction in the last couple of years in Berlin. My mother has a way with words and we write letters to each other. She has a beautiful turn of phrase. When I visited Australia earlier this year, instead of saying “Have a safe flight,” she wrote “My thoughts wing their way to you as you are about to wing away.” So that is my inheritance.

Berlin and Sydney are hard and soft in different ways and when you experience the harshness of one you wish for the troubles you had in the other. At the moment it’s the troubles of Sydney that beckon. I’ve always loved to have a chat but you know the old joke: What did one German say to the other German on the street? Nothing!

SAND: Literary food writing tends to focus on sensual experiences, memory or travel. When the ethics of meat-eating are addressed, the result usually seems to be polarised rather than ambiguous, as in your essay. Did it feel like a big topic to undertake? Of which dilemmas were you thinking?

McCarthy: It felt a little delicate. I didn’t want to write as if I was justifying myself, yet I wanted to show that it was anything but a flippant decision and that it was born from sheer physical weakness. I wondered, who would want to know about someone’s excruciatingly complicated diet and how they feel about eating meat? Does drawing attention to physical suffering in an essay – my own or the animals that we eat – come across as indulgent? But I just started with Dave and our friendship; how the steak dinner was an act of care on his part and an act of desperation on mine. That felt right.

SAND: Chronic illness – especially the “invisible” kind – has a growing profile in public discourse even when the realities of dealing with one of these conditions can be frustrating due to a shortfall in research or knowledge among primary carers. Did you always know you wanted to write about your health experiences? What did you want to take into consideration when you tackled the topic?

McCarthy: I have never wanted want to write about my illness and at the same time I couldn’t completely avoid it. I don’t name what ails me in the essay because I didn’t want to commit to educating people about it, to engage with the lack of public understanding and old narratives that hamper research and treatment and that are difficult not, at some point, to internalise. That will be another piece. The thing about invisible illnesses is that there is such a gap between what one experiences day in and day out, and what other people see and wish to understand. If I wrote about my condition in greater detail I would need to reckon with that gap. But in this piece I wanted to just nod at it, and keep a strong line going to the parts of the story that I am most comfortable writing about. I wanted to recall all those lovely nights with my mate, the whole wash of being very sick but making the best of it together and leave a fair bit of the difficult stuff to the imagination.

SAND: And lastly, some questions for all writers. What’s inspiring you now (books, film, music, people, experiences) and what are you working on?

McCarthy: I’m working on a short story – there’s a nurse, Big Trish, who has moved into a small town in Australia. She’s working the night shift in the emergency department and finds out that John, a big man in town (he runs the community gardens and is on the council), is violently abusive to his wife. John ends up in the emergency room himself after treading on a poisonous fish and finds himself in Trish’s capable hands.

Book: The Lost Flowers of Alice Hart by Holly Ringland

Susan Sarandon as Reggie Love in The Client

Balls of Balkan string cheese sold at the Turkish supermarkets