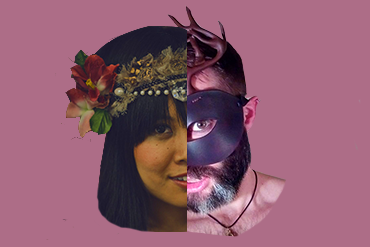 The writer and performance artist Lena Chen moved to Berlin and adopted a new name and identity. The Galician-born and proudly Icelandic poet Elías Knörr has “localized” his pen name in a rejection of insular ideas of nativeness and foreignness. They both perform (under even more personas) at the Poetry Brothel, a series of burlesque-style literary cabarets in nine countries that include private poetry readings in place of lap dances. The next Berlin session of the Poetry Brothel – Bacchanal edition – will be on 30 August.

In parallel, we asked Lena and Elías a few questions about their alter egos.

Can you tell us how you decided to adopt an alter ego?

Lena: I started writing an autobiographical novel shortly before I moved to Berlin, and Elle was my protagonist, based on myself. I was simultaneously working through a lot of trauma related to being a victim of revenge porn and Internet harassment). I decided to start modeling as a way to reclaim my image – which had been disseminated without my consent. I took on the name “Elle Peril” in real life, created social media profiles for her, and lived under this identity for five years. I shot with photographers across Europe and the US and went by the name Elle, which is still the name most of my friends know me by in Europe. Embodying Elle Peril meant that I could escape unwanted online attention, rebuild a life beyond my trauma, and explore my sexuality and relationship with men.

Sexuality has been a source of shame for so much of human existence, because it’s powerful and threatens those in power. If we can find a way to understand our desires and harness our sexual energy, we can heal ourselves and correct social injustices.

Elías: I’ve always worked with alter egos. For more than ten years now, I’ve been publishing by putting myself in somebody else’s shoes. I’ve done a little bit of creativity theory and I prefer to neutralise the author’s ego and always look for inspiration outside myself. That’s how you always find more new and unexpected stuff. I like setting aside romanticism and my inner feelings and searching for inspiration in the outer world rather than in my own heart, because no matter how deep and broad my mind is, the outer world will always be wider and will always surprise me…

I could speak about this for hours, but let’s say that creating an alter ego is one of the many ways to forget about yourself and look for new creative strategies. It also helps you get out of your comfort zone and be more permeable. I often also work as if I were the translator, the interpreter, or the editor of my own texts; it makes things much easier when you see them from outside.

Lena: Identity is confining when we limit ourselves to one identity or kind of life. I found that creating an alter ego freed me from the expectations of others.

Elías: It doesn’t have to be less comforting or comfortable than the clothes you decide to wear. I don’t find it confining at all but, then again, it can imply some self-imposed restrictions. These are actually very useful, since accepting a character also means accepting new rules for the game. These rules make you travel in new directions and they help you avoid certain areas that you might wish to stay away from, in order to change. Maybe it sounds like they could be a problem, but actually, the challenge is what calls for intelligence and creativity.

I live in Iceland, which has a great literary environment but the community is very very small. It can be quite dörflich [village-like] and full of expectations and prescriptivism… So the theatricality of alter egos can break all those limitations and bring a lot of freedom to a writer.

Besides, I have foreign origins and, for a tiny society, that’s quite a heavy issue, which is better to avoid as much as possible in order to protect one’s work from being spoiled by one’s real identity. Using an alter ego that nobody knows can serve as a mask. Maybe it doesn’t help with promotion, but if you get good responses, everybody knows it’s because of the value of your work, not because of who you are. I’m such an ugly duckling that I would never have got here if I hadn’t put on that mask in the first place.

Where would your alter ego feel most at home?

Lena: Living in a temple with a cult of priestesses devoted to goddess worship.

Elías: That depends a lot on the alter ego or on the work. It’s a matter of performance, so it always belongs to some kind of scenario; this can be a film or the pages of a book, but of course also the place where one is performing. Some voices, like the SpiegelHaut-project that I’m working on in Germany, only materialise while singing in Late Latin, but there’s another alter ego that fictionally died a hundred years ago and maybe could only come to life through a comic book… Let’s see. My brothel character, Michaël Drake, claims in his bio that he only feels at home when he’s performing poetry, wherever he is at the time.

When you write or perform as your alter ego, do you feel like a different person?

Lena: Yes, within the Poetry Brothel, I perform as The Poetry Oracle, who writes custom poems in response to a question and a card drawn from an oracle deck. Depending on the client, I can be extremely seductive or more sage-like. I find myself becoming more confident or even dominating. These are probably aspects of my personality that exist, but for whatever reason, I haven’t felt comfortable showing it in my “real” life as Lena Chen, though that’s quickly changing.

Elías: I do as an actor does. As Michaël Drake in the Brothel, I sell dreams and the client is paying for that, not for my boring reality-self, so I stay in character and talk and act as he would do. He’s 577 years old, so his human feelings have a very different perspective than mine, but at the same time, he ignores many things that I know and has even bigger memory problems than I do… So, yeah, we’re quite different. Sometimes it takes me a while to get into a character, but the funniest thing is when you’re still in character and you continue acting like him/her and start flirting with the waitress even though the show is over… Once I had a character for a project (a physically impaired, rich young lady called Magda) who never came to life because I went to a literary festival and I started behaving like her. It actually had a good impact on my performance, but it freaked me out a bit so I killed her.

When writing as an alter ego, the process can be a bit more complex… Sometimes I make up funky rituals in order to get into the mind of the character, and I try to surround myself with things that inspire that personality. In a way it’s like an invocation. Sometimes I also feel like the alter ego’s text is already written before I start it, that I just need to rescue it from oblivion or edit it… I don’t know if it makes sense, but it helps to have that certainty as a starting point when actually there’s still nothing.

Would your alter ego do or write things that “you” wouldn’t, or vice versa?

Lena: Absolutely – being Elle allowed me to interact with men again and overcome fears about being taken advantage of. I felt really unsafe and paranoid in men’s presence for many years. Within the context of a photo shoot, I was able to carry on a conversation and sometimes even become friends with men. Of course, there have been photographers who have tried to cross my boundaries, but the art modeling community is really strong and conscious about safety. Before #MeToo ever happened, I have spoken with so many models about being hit on, harassed, or violated in the course of our work. Models have blacklists and whisper networks which attempt to hold photographers accountable for inappropriate behavior.

Elías: For sure, that’s what alter egos are made for, for doing crazy things! And it’s very healthy, sort of a carnival. Some of Michaël Drake’s texts I would never publish under my name, but they’re perfect for the Brothel. Also, when I compose melodies for my readings, I always tend to do medieval and folkish things, but for the ContraFaces film I was being somebody else with somebody else’s texts, so I wrote some kind of a singer-songwriter song with Erin Moure’s poem “Dog of Water.”

Also, when you’re only being yourself, both the person and the author are the same thing and you might need to defend your literary authority in quite an academic way. But when you’re being a character, that’s totally out of the question and you might even feel more free to talk about tricky political or social issues as long as it fits in the game.

I would even dare to say that in a modern society where context is systematically ignored and words are constantly misplaced, the “masquerade” of expressing yourself as an alter ego can easily be more authentic than the fake reality and post-truth that surround us in traditional and social media.

Lena, what made you decide to retire Elle last year?

Elías, is there anything else you’d like to tell me as “yourself”?

Elías: Well, I’m Elías Knörr, an Icelandic writer but born in Galicia. I’m mainly a poet and translator but I also write so-called “weird fiction” and I do some performing and music. I’m living right now in Berlin on a writer’s fellowship from the Republic of Iceland, but I’ve already been to Germany six or eight times for festivals organised by Lettrétage and several universities. I write in both Icelandic and Galician, though I use more languages when I perform. The UK Poetry Review once considered me one of the three most representative poets of the post-crisis period in Iceland, and once I also won the biggest poetry prize in the Galician language. My texts always have avant-gardish tastes. I like to work on “the possibilities of words” and search for external, not personal inspiration. I love queer issues in the broadest sense you can imagine. I’m a regular collaborator with the UNESCO City of Literature in Reykjavík and I sell dreams at Rauða Skáldahúsið, the Poetry Brothel of Reykjavík. I’m a very boring person in real life but I haven’t felt bored since I was a teenager. I find literature to be one of the most hygienic tools we have for our souls and for society. Some people read my poems and then ask my publishers whether there’s a woman hiding under my boy’s name. English translations of two books of mine are coming out soon, and now and then I read individual translations of my poems in German. I’m actually learning German… but my accent sounds more like Zara Leander’s than like standard Hochdeutsch.

Learn more about Lena Chen’s life and work on her website (NSFW). Or see her at a future edition of the Poetry Brothel.

While we eagerly await Eliás Knörr’s books in English translation, you can read four translated poems here and a profile of the poet here. Or purchase a private reading at the Poetry Brothel on 30 August in Berlin.