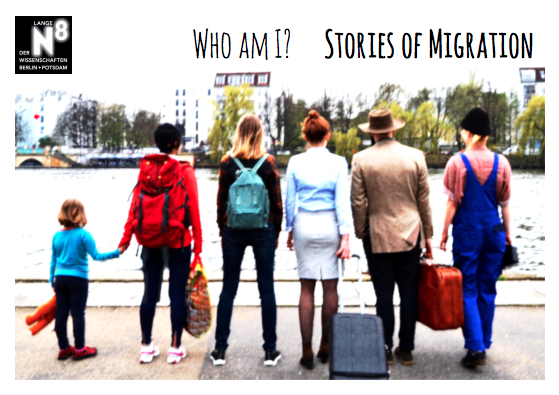 If you don’t live where you were born, who are you? How do you identify as you move to other places and make a new home in the world? On 9 June, ‘Who am I? Stories of Migrations’ focused on migration as part of the Long Night of the Sciences, including a reading by novelist, playwright, and translator Kate McNaughton, who was born in Paris to British parents and now lives in Berlin.

The students of the Centre for British Studies presented their project for the 2018 edition of the Lange Nacht der Wissenschaften (Long Night of the Sciences).This year’s group of students has been working hard to create an interactive exploration of stories of migration to the United Kingdom. Join them at Humboldt Universität’s Senatsaal for an extensive all-night exhibition and take part in their workshops and roundtable discussions on contemporary issues of migration and migrant culture.

The event delved into migrants’ experiences through individual stories, testimonies, and artwork. Visitors could share their own migration story by drawing their own journey on a map, or sharing their thoughts in a roundtable discussion. There was food from around the world and a fun quiz to close the event. At 8pm, Kate McNaughton gave a reading from her debut novel How I Lose You. We already spoke with Kate about migration when we ran into her at Writing in Migration: the African Book Festival:

Kate McNaughton (@katemcnaughton) was born and raised in Paris and now lives in Berlin. She read English and European Literature at Cambridge and filmmaking at the European Film College in Denmark. Her debut novel How I Lose You was published by Doubleday (UK) and Les Escales (France) in 2018. As well as a writer, she is also a documentary maker and translator.